The FIFA international break came to a halt with European club football at the center of affairs. Bayern Munich ran roit over Werder Bremen while Real Madrid had no mercy for Levante and Southampton made mincemeat of Sunderland.

On the red half of North London, Hull came visiting and the memories of the 2014 FA cup came afresh but Bruce was having none of it. The Tigers came from behind and almost went home with a three points no thanks to Welbeck’s late strike. Sanchez had put the gunners ahead in the 13th minute before Diame pulled Hull back minutes later. Immediately after the break Hull went ahead with a header from Hernandez. 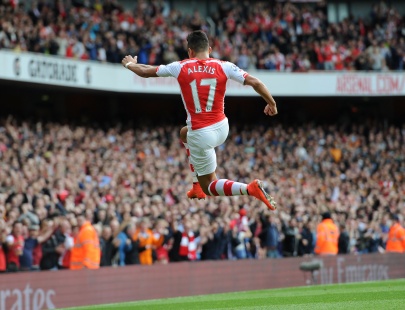 Match report. Wenger’s Comment.  Player Ratings.
1. One Point.
Half bread is better than none just as one point is better than none. Arsenal is becoming consistent in enjoying half-breads and one points. Relief was all over the Emirates and beyond because the gunners had come from behind and had managed to score in added time. Is 3 point an abomination to these present team? The gunners have only won 2 games from 8 in the league.

2. Play To The Whistle
Mathieu Flamini was guilty of losing the ball once again in his own half resulting to another goal. Albeit, it should have been a foul but the gunners failed to play to the whistle as the Tigers grabbed the equalizer. The gunners must realize that it is not over until the whistle is blown. You just don’t switch off infront of your goal. Flamini must step up his game and use his experience to work his way through.

3. Makeshift Defence
Injuries and suspension had a great chemical reaction and robbed Arsenal of a tested back 4. Wenger may have been the catalyst for that reaction but surely not the provider of the injuries nor suspension. Koscielny niggling injury made him unavailable and Chambers new yellow romance had him suspended, leaving us with slow Metersacker.
The back had youthful Bellerin and Gibbs with Monreal playing as a center back, one of Wenger’s preseason experiment. The experiment failed with Diame bulldozing his way to grab a goal. Will Hayden or Ajayi have partnered better?

4. Arsenal and statistics.
With over 65% ball possesion, Arsenal was expected to have made that count. It is becoming customary that the gunners bask in the aura of having all the possession of the milky way but can’t convert that to a goal. 25 shots with just 9 on goal calls for medical attention. 10 wasted corner kicks may suggest the gunners may have to overlook them since they have been as productive as Yaya Sanogo.  The gunners must realize that they are 11pts behind leaders Chelsea, and are behind City, United and Liverpool. The top4 chase is already on and the gunners have even started late. The only stats that matter is the goals scored.

5. Ramsey Returns, Wilshere Injures
It was positive to see Ramsey return from injure, although he added little or nothing to unlock the Tigers cage. The Welsh Jesus will definitely be in Belgium for the Champions League tie against Anderlecht. Wilshere was subbed off and adds a little worry to Wenger’s injury headache.
Injury is not an excuse says Monreal ahead of the UCL tie:

The Champions League is THE competition for club teams.
“Injuries are a handicap to us but if we do want to go through we are going to need everyone playing at the top of their game.
“We will not use injuries as an excuse. The squad is 24 or 25 players and the rest of the squad has to come in and maintain our level. We won’t use it as an excuse.
“I haven’t played much as a central defender, I’m naturally more of a left-back, but if the manager wants me to play there, I would do my best.
“Injuries affect all teams but we have had some bad luck. Many of our important players are out and that obviously has an impact.

It was warming to see Campbell too and the gunners will hope to see Theo in a few days time.

It is sad that we are still in preseason mode but the Anderlecht game should be more than a mourinho-like shove but an encounter that will spring us to this season. Enough of mediocrity.