Monday night was not as planned for the Cazorla led gunners as they fired blanks in a goalless stalemate with visiting Liverpool. 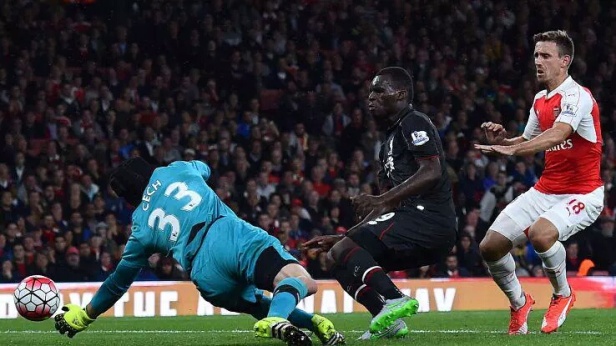 If the woodwork was the goal, then Liverpool could have gone home 2-1 winners. It was a game of 2 halves – Liverpool huffed in the 1st, Arsenal puffed in the 2nd. Cech and Coq saved Chambers’ blushes as Coutinho and Benteke looked to exploit the inexperienced center back.

Metersacker got a flu – why always him, Koscielny hurt his back and will even miss the Newcastle game. Into the fray, Chambers and Gabriel were meshed up for their 1st competitive pairing. The 1st half was poor with Chambers clearly uneasy but the 2nd half was much better. Ironically, this is Arsenal’s first clean sheet on the season.

A draw was the result of the 90mins near-misses with Ramsey calling for video technology – his goal was wrongfully chalked off for offside. Arsenal is on same points with Champions Chelsea although with less amount of red cards – 4 points away from the Citizens.

Away from the pitch, looking through the window as the dry transfer season draws closer to the end, it seems Benzema is not coming after all. There seem to be a Russian on the lonely roads to Ashburton Grove, riding on a gossiping horse. Rumours say he is Kokorin but i have to close the blinds and wait for Arsenal.com.

The Capital One cup draw was made last night and the gunners will visit the shit-hole down the lane. Will it be Reine-Adelaide show? Sips lipton.

The Champions League draw will come up tomorrow. Spain have 5 teams – shivers – while Celtic were knocked out. Maccabi Tel Aviv will be in the group stage. My first ever jersey was from Tel-Aviv. My dad got one for me when i didn’t know what a club was. Hopefully Arsenal is drawn in a group that will be fair.

Unfortunately for Taraba FC in the city of Aba, they couldn’t hold on to a draw despite saving a spot kick from Enyimba FC. Musa Najare shot Enyimba back to the top of the Nigerian League. Hopefully they remain there till the end of the season.

While the Nigerian atmosphere is awashed with Oliseh’s official car, the NFF will do good to check Ofoegbu Gloria out.

For now, no more draws at the Emirates, in Aba and Jalingo.