It is like ages since I watched the Arsenal play. That Tuesday ouster from the League Cup is like last year though the wounds still remain. I am not of fan of transfer news; either because we rarely do buy the people we really want. We are mere scouts scouting for the big club. When I think of the likes of Mata, Cech, Ronaldo, Ibrahimovic, Vertoghan, Drogba, Hazard slipping through our fingers I mourn.

Worry not if you seek transfer news and speculations, goonerdaily has packaged some that you may like. Since the North London Reds couldnŌĆÖt keep me watching I kept myself busy with a beach soccer mini tourney: the COPA Lagos. 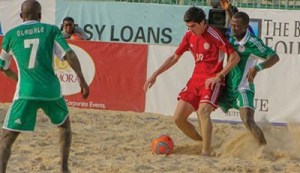 The COPA Lagos is an invitational tournament that always involves the host Nigeria and any other three teams around the world. Beach soccer is fast growing around the world and Nigeria uses this tourney to keep fit and prepare for their international challenges.

The perennial African champions, Nigeria played against the European champions, Portugal, Lebanon and Argentina. The tourney is a round robin one with the team with the highest point going home winners of the tourney.

The Sand Eagles as Nigeria Beach Soccer team is called beat Lebanon 7-6 in an entertaining encounter in Day one. They poised themselves to retain the trophy in Day 2 by trouncing Argentina 5-0. Meanwhile Portugal defeated Argentina 4-0 in their opening match while Lebanon surprisingly defeated Portugal 5-4 in Day 2

I wonder if Messi would have helped. Beach soccer is a high scoring football event and Messi may have scored 20 more goals to cancel out ChitaluŌĆÖs record. Well, FIFA have washed their hands off the records saying that they keep records of only FIFA tournaments.

The final day was challenging for the Sand Eagles as they needed not to lose to Portugal by more than a goal margin to retain the trophy. The first period ended 4-2 in favour of the European champions. But the Nigerians responded in the second period to bring the scoreline to 7-5 with the Portugese winning.

Playing without Maja, the former beach footballer of the year, Portugal failed to score in the third period as Nigeria added 2 goals to finish 7-7 in regulation time. So Nigeria won the tourney.

A beach soccer match must have a winner; so the match continued in extra time and Nigeria added another goal to make it 8-7. Meanwhile Lebanon finished second after defeating Argentina 5-4 in their final game.

Enough of beach soccer, Arsenal face reading tonight. Giroud is back, Walcott is doubtful but Diaby would never be back. I hope we win so we could stage a comeback in the league. Is that still possible? Yes.

We can catch up. We would catch up. Just believe. We might even overtake the European champions. If Corinthians could topple them thanks to former gunner Edu in the FIFA Club World Cup in Japan, we can.