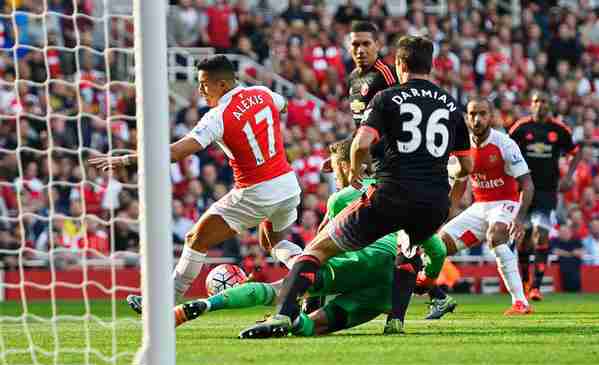 There is this confidence that the Red Devils have when they see that they are to face Arsene Wenger’s Gunners on the battle field. There is this strong belief that they will not lose to Arsenal, even if they put up a team a shitty defence that is Young, Smalling and Blind.

Three goals in the first 20mins was all the blitzing Gunners needed to send the Devils to Hades. How did they come out with that nick name? Imagine a club having “white shit” as a nickname. Well,  that was none of Alexis business on Sunday as he grabbed a brace to increase his season’s tally to 6 goals. Ozil grabbed a goal and an assist with Walcott providing for the other two goals.

This was a response that was surprisingly unexpected. Arsenal could only beat Manchester United last season in the FA Cup with Danny Welbeck lapping up all the praises of that day. Get well soon lad. 2 goals in 2 minutes was “boom” in Philosophy’s face. Who cares about Philosophy when you know and have the urstuff.

Arsenal’s front three dissected United’s back four leaving them here and there too many times. Passes sliced through like hot suya knife through virgin butter. Ramsey decided not to register a goal despite the goal begging to be gotten. All of Arsenal’s attacking players may have gotten a goal but Giroud flattered with the Ox cursing the crossbar.

At the back, Cech justified his price tag with saves from Bastan, Rooney and Martial – the boy looks sharp, but this is Arsenal. Metersacker organized his defence well with Gabriel creating a niche for himself. I hear Arsenal have not conceded a league goal with Gabby on the pitch. Costa must have known of this to force him off when they met. Bellerin had Young for dinner, Monreal had no Mata to deal with. It was a joy.

At any point you are side, think of the Chelsea-bridge-defeat Saturday intro, ponder at Alexis’ back heeled goal, glory in Ozil’s placed shot and Alexis’ roofing. De Gea will wish he was in Madrid. You can look at the table to help your mood, peep at Anfield to see what they are smoking and help Mourinho with some excuses to get blue oil down the table. 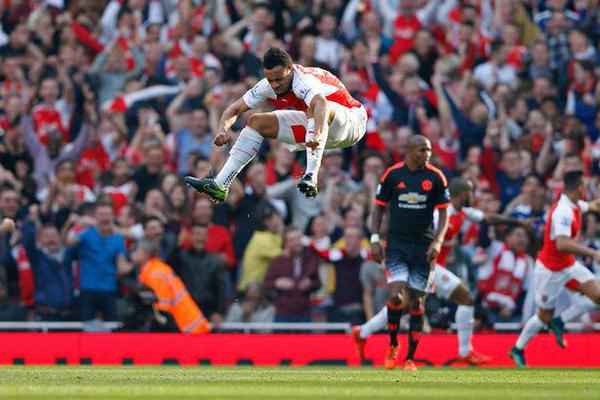 This is Arsenal. The bedrock of Passion. Look at Coquelin – Great passion. I wonder what he will do if he scores the winning goal that gives Arsenal the Champions League. Football is all about passion. Great weekend.

Not so great weekend for the Elephants of Nigeria. Enyimba lost the Oriental Derby against Heartland in Owerri but are still 3pts ahead of Warri Wolves in the title race with 6 games to go.

It is also an international break. Nigeria should play a couple of games. My eyes will be on Arsenal’s Alex Iwobi. He needs this game to be able to feature for the U21s. Hopefully Ahmed Musa steals the headline from the bench boys.

Have a lovely week.