The gunners were washed away by the blue half of Manchester much more than United had done some weeks ago. Buoyed by their 3-2 win over current UEFA champions League champion in Munich, the Citizens were poised to burst Arsenal’s bubbles. 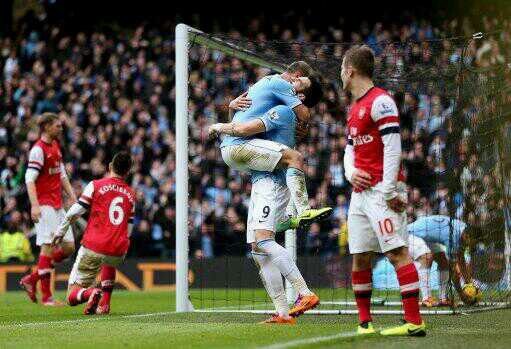 Arsenal on the other hand lost to Napoli in Naples on Wednesday and had to make do with an early Saturday fixture no thanks to viewership demand and manoeuvre. Walcott started his first game in 3 months but his brace couldn’t keep the gunners abreast Pellegrini’s side.

Sergio Aguero opened scoring on 14 minutes from a corner kick. David Silva’s corner was flicked in by Demichellis and Aguero lost Koscienly to score. City enjoyed possession, pressing Arsenal until Aaron Ramsey robbed Yaya Toure of the ball. The welsh man played in Ozil on the left and his pull back found Walcott who grabbed his first goal of the game. He celebrated with his unborn child in mind.

Arsenal couldn’t hold to play as City added another. The left back side was left unattended as Zabaleta drilled in a pass for Negredo to stab in. 2-1 down and with Koscienly groaning in pains, the game looked to be heading to the blue corner. Vermaelen came in for the injured French man.

Five minutes into the 2nd half, the gunners were further down. Fernandinho latched onto a misplaced pass from Ozil which Flamini could not collect. Fernandinho wasted no time in punishing the gunners. 3-1 to City.
Giroud went on to miss a hattrick of chances before Walcott curled in a beautiful goal teed up by Ramsey. But the moment was short lived no thanks to poor arsenal defending especially from the left side. Silva slicked in Navas’ low cross to make it 4-2. 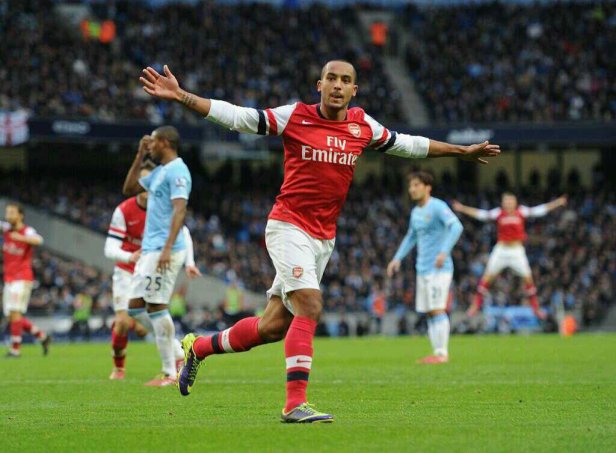 Giroud put the ball in the net but was contentiously ruled as off. In came Gnabry with Flamini off. Fernandinho clipped his second goal in after the gunner’s was badly exposed. Jack wilshere gave the ball away in the center circle. Metersacker and Vermaelen could do nothing as their team mates were strolling back.

Bendtner came in for misfiring Giroud and headed the ball into the net yet again, but his goal was ruled off. Was it? Metersacker seem to have reduced the deficit after he headed in Arsenal’s third. But a late yaya toure penalty wrapped up the 9 goal thriller.

Despite the loss, Arsenal remains on top of the league, though with just 2 points. In 9 days time, the other blue test would hold at the Emirates.

A bad week for the Gunners.