Mesut Ozil put up a man of the match performance as he scored and assisted another as Arsenal beat Newcastle 3-0 at the Emirates.

The German international was a thorn to the toons as his brillance could not be equated. Guoffran hard a mouthful of the Emirates grass as Ozil mesmerised him. Ozil’s partner-in-crime, Ramsey added misery to Alan Pardew.

Returning to the sidelines after a lenghty ban, Pardew could do little as his french-ladden lads were outplayed. Pardew’s Frenchies were undone by 2 french internationals: Koscielny and Giroud.

Overlooked by the PFA, Lauret Koscielny turned in Cazorla’s cross to open the floodgates in the 26th minute. Just before the break, Tim Krul saved twice from Giroud but Ozil was on hand to tuck in the loose ball.

Ozil turned provider in the second half as he collected Ramsey’s reverse pass to cross for Giroud who gave Krul no chance for Arsenal’s 3rd of the night. 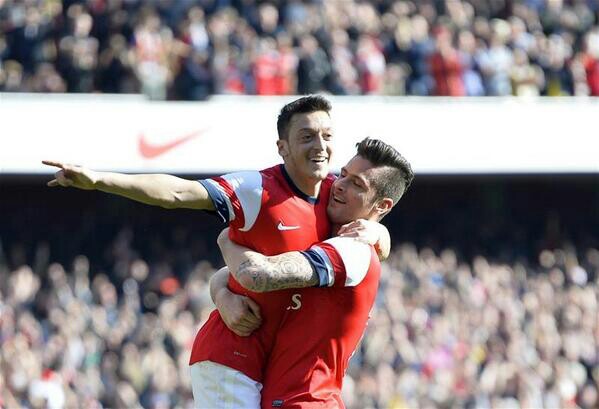 The gunners will go on to keep their 15th clean sheet of the League thanks to Szczesny and Koscielny, both overlooked by the PFA. Szczesny needs 2 more clean sheets to overtake Cech.

Flamini, Rosicky and Sanago all came in at different times for Ozil, Ramsey and Giroud respectively but Sanago was unable to open his Arsenal account.

With 2 games to go, Everton are 4pts clear of 4th after occupying 4th for a matchday. 2 surprising straight loses have created a gulf between the Toffees and the Gunners. 1 more win, and the gunners will finish 4th and have a go at the Champions league. Wenger must have made a deal with a Japanese god.

And for Tottenham, the story continues like before. 19years and counting. Mind the gap. Arsenal should be thinking of others than Spurs.