Arsenal had a date in Hades and they had to honour the calling of the Red Devils in the Underworld steered by chewing gum manager Sir Alex Ferguson. 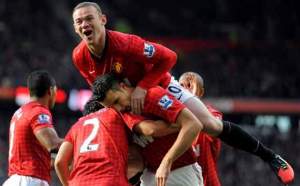 On a day the blue half of West London rooted for their North London rivals, the odds were against the team not from the underworld. The gunners have won only one of 10 matches held at Old Trafford.

Robin Judas who had led the gunners challenge in the last Premier League era had a gift he couldn’t reject from Vermaleen the Vermon to thrust the first devilish fork into the side of the gunners. He thrust it deep to draw first blood within 2 minutes.

The raging battle, watched by the entire universe, continued with cagey fights, tackles flying left, right and center. The Red Devils missed a lot of chances to increase their lead but Don Vito kept them at bay with unbelievable saves.

Saint Santi handled the fire ball in the Arsenal area and Dean of the galaxy of referees, Mike Dean pointed to the spot. Red Devil kingpin, Shrek Rooney, stepped up to shoot his arrow to the gunners. The stats were against him as only 6 of 10 penalties have been converted at Old Trafford between these sides since the reign of Wenger. He missed.

It is pitiable to note that the gunners’ first salvo was late in added time of first half when serial popular-figure killer Ramsey tried a shot after usurping Evra. The Reds from the London Emirates hadn’t mustered any reasonable attack.

Lord of the Rings Reading, Theo, came on for serial killer Ramsey but his impact was below par. The ammunition dried up as Arch Evra jumped best to draw second blood.

Jack the daring Englishman took an early bath for a second bookable offence as the gunners slid down Hades Mountain to the burning flame of losing. 1 in 10 attempts at the hades!!! What else was expected?

Russian assassin Arshavin come on for German Prince Pod for a cameo role but the passion to kill the devil or get even with him after that memorable 8-2 lost in the last era.

The gunners had lost hope and passion but saint Santi’s last strike in the encounter was too late to muster a comeback like the Madejski scenario. Cazorla’s goal couldn’t save the hell-slide of the Arsene Army as the encounter came to a halt. If his equalizer was earlier, Arsenal might have survived.

So Robin Van Persie scored as expected and he didn’t celebrate the goal because he claims he respects the club he has played for in 8 years. Well, touchy but his past. I loved and hate him.

So we left our long spoons in the emirates when we were meant to be with it to dine with the devil.

Wenger lost again, our 3rd loss of the league. We play Schalke 04 away in Germany on Tuesday. Can we regain our pride there? Let’s see.