From the creeks of the Niger Delta, to the heights of Kilmajaro; from the Thames to the Australian Desert, the world stood still for a clash in London.

It was a case of two different sides of London. The North and the West. Red and Blue. Wenger and Mourinho. American and Russian. Different ideologies and approach.

Arsenal were top of the log before the week 17 matches. Suarez had taken Liverpool to 36points and Manchester City defied the odds of losing away and took 3points from Fulham to match Arsenal’s 35points.

Prior to Monday night, Arsenal had been demoted to 3rd spot with Everton’s victory at Swansea pushing Chelsea to 5th. A win was needed by both sides. Arsenal needed to go back to the top aloft with 2pts and Chelsea needed to be equal with Liverpool.

Every Tom, Dick and Harry expected a win from one of the sides. Goals were expected even if it would be a case of shared spoils.

Unfortunately for the football loving fans, no goals were recorded. 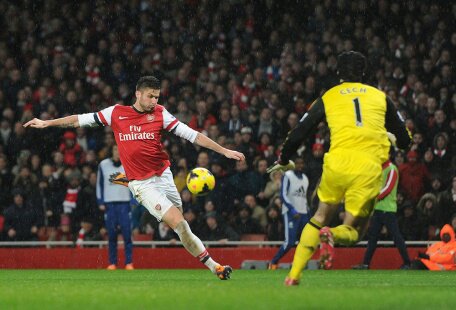 The teams tried to contain themselves within the 1st 20mins of which Arsenal controlled most of the possession. The 1st real chance came from the Blues. Lampard shot sprang out of the crossbar to the relieving signs of the gunners.

Arsenal enjoyed possesion but Chelsea were content with allowing Arsenal pass around but made use of loose balls for daring counters. With notabke errors, the gunners fail to break the Chelsea back 4.

There were cases of inconsistent officiating where Mikel fouled Arteta and yet went free. Walcott was contentiously fouled in the box. Walcott was booked wrongly for a foul he didn’t commit.

The gunners mustered no shot on goal in the 1st half. In the 2nd half, Giroud missed a glorious chance to put Arsenal ahead. He could only skew his shot wide with only Cech to beat.

The 1st real shot on target came later on. Rosicky and Gibbs played superbly to lay back for Olivier Giroud to poke in. Cech looked bigger and over the bar the ball sailed.

The second meaningful chance came from qn Ozil corner. Sagna nodded the ball towards goal but it was cleared off the line.

The game will wear on but Mourinho made his subs but Wenger seemed comfortable with his starting 11. The fans expected to see Podolski coming back from injury. Cazorla may have been average but a newer dimension would have been a delight to watch.

A United fan even confessed that Bendtner is more of threat in the box.

when dean blew his whistle, there was great discontent in the air. Boos from fans at the stadium, sighs from bookmarkers that had expected Arsenal to have beaten Chelsea.

So Arsenal almost returned to the top but their inferior goal difference has kept them second into Christmas. There is a myth about leading by Christmas. If that myth is true then Liverpool would win the League. Myths are myths.

Wenger also failed to record his 1st win over Jose. This was a good time following Chelsea’s poor form.

The gunners expected to have the Blues for Christmas but their guns were useless. They had been carried away by their party. It is even worrying that the gunners had 9days rest while Chelsea had just 5days yet they couldn’t win.

Questions are springing up especially after Arsenal could only manage 2 points from a possible of 9 in 3 games. Losing to City away and drawing two home games against the top 6 sides is unacceptable.

There are two more games to end the 1st half of the season and the year. Anything less than 6 points is a failure.

The Window opens soonest and Arsenal must get a killer striker else it may be the 9th year of the drought.

I am currently in the creeks of the Niger Delta on the Kalomo river in a pseudo fishing operation. Oil fish.