After the brown patch of form against the blue teams of everton, Manchester and Chelsea, Arsenal needed to respond positively at Big Sam’s Upton Park.

Cazorla was drafted into the starting eleven, the only change to the side that fired blanks against Chelsea on Monday. Rosicky didn’t even make the bench. Podolski and Serge Gnabry had their places on the bench.

The gunners started on the back foot with West Ham pressing on in the 1st 15 minutes. Arsenal got hold of possession but failed to test the hammers goalie. Charlton Cole was a threat to the gunners. Szczesny pulled a great save from hammers’ free kick on the edge of the box. The 1st half had no clear chances as Arsenal failed to utilise the  corner kicks.

In the 2nd half the gunners were stunned within 2 minutes. After failing to utilise a chance at the hammers half, the hammers countered the gunners. The defenders failed to clear the ball and Szczesny had a sting of a shot of which he spilled to C.Cole. The striker wasted no time in placing the ball behind szczesny to the delight of the home fans.

A boxing day of errors from the premier league goalies. From spills to red cards to flaps and miscalculations. Szczesny had given away his present and the hammers were to gift Arsenal a gift later on.

The goal raved the engine of the gunners and the pace of the game increased immensely. There was a sense of urgency knowing that even a draw was a failure.

Arsenal’s best player of the season so far Aaron Ramsey had to wobble off for Podolski to return. The German introduction gave Arsenal a cutting edge with his directness. 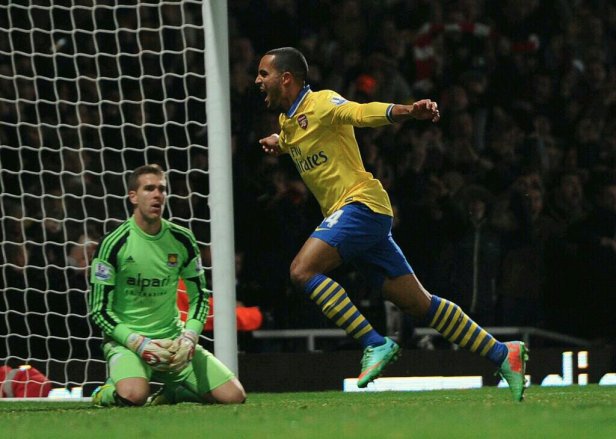 A ball fell to Theo Walcott, who had just performed averagely. The English speed man drilled a slow shot through the legs of 2 players and the goalie could only catch the wimps of air after the ball settled at the back of the net.

The goal brought belief to the gunners following a day of come backs in the League. United had come back from 2 goals down, Newcastle had come from behind.

Podolski was involved in the second goal. Gibbs tried to get into the box but the ball fell to the German who crossed into the hammers area. The ball was deflected on to Walcott’s aeriel path and he wasted no time in getting his brace.

Podolski had the last cut after drilling a shot to the bottom corner of post after Giroud had laid the ball for him. Podolski had tried 3 shots before then and was delighted to score on his return.

Flamini came in for Ozil and Bendtner in for Giroud. Flamini locked up the midfield and bendtner had a shot from a tight position that went across the face of goal.

3-1 to the gunners and Arsenal is back on top. Manchester United won 3-2 at Hull. Chelsea defeated Swansea 1-0 thanks to boxing day gift from the goalie. Everton surprisingly lost to Sunderland after Howard saw red. Newcastle came from behind after Stoke had 2 players saw red to get 3 points. Crystal Palace scored a late goal to win away at villa.

Later on, Manchester City came from behind to win Liverpool 2-1. So one point separate every team in the top 4.

Newcastle is next. Remember last year.