The long awaited 2014 worldcup begins in last than 24hours. Club football is on hold with the European Season concluded. African leagues have taken a break just to concentrate on the events in Brazil.

Arsenal like every other club on planet earth have sent some emissaries in the nations of their respective countries to represent the FA cup champions. The gunners had some stars that were left out of their nations’ team for either of injury or non-selection by the coaches.

Theo Walcott, Keiran Gibbs will not feature for England. Neither will Nacho Monreal, Serge Gnabry feature for Spain and Germany respectively. Mikel Arteta is even yet to make a Spanish debut. Flamini and Diaby were expectedly left out of the French squad.

So which of the stars from the red half of North London will done the colours of their nations in Brazil?

The trio of Lauret Koscielny, Olivier Giroud and Bacary Sagna will represent France in Brazil. Koscienly will hope to play alongside Varane or Sahko. He will need to fight not to be left out of the starting eleven. With 15 appearances to his name and no goals yet, Koscienly will hope to have a good worldcup by helping France get a clean sheet and maybe scoring those vital goals like in Arsenal.

Sagna‘s starting berth is sure but his return to Emirates is unsure. A commanding performance will be expected from the right back who have featured 37 times for the french side. With 9 goals in 39 appearances, Olivier Giroud will hope to score for France. the Arsenal striker will battle for starting berths with Karim Benzema and Arsenal’s potential Loic Remy.

France will play Switzerland, Equador and Honduras in Group E.

Germany
Arsenal used be an almost French side but Wenger have brought in Germans in recent years. Three of those Germans will feature in Brazil: Per Metersacker, Lukas Podolski and Mesut Ozil. The Germans are in a more difficult group than their french counterpart. They will face Portugal, USA and Ghana in group G

Metersacker will hope to reach a century of appearances for the German machines in Brazil, most probably with a headed goal to add icing to the century cake. The king of assists, Ozil, will continue from where he stopped in South Africa by supply the strikers with hot-knife passes to kill off teams. Podolski is more poised to shoot down any team. 113 appearances and 46 goals is no ordinary feat.

Alex Oxlade-Chamberlain and England’s posterboy, Jack Wilshere are the only gunners in the Three Lion team. With concerns on injury and fitness, the duo will be key to England’s challenge in Brazil. The Ox will hope to fit enough to feature while Wilshere will need to usurp the partnership of Gerrard and Henderson, not forgetting Lampard lurking around. The Three Lions will indeed miss Theo Walcott.

England will face Italy, Costa Rica and Uruguay in group D. A mountain for the Lions.

Santi Cazorla is the only gunner in the spanish dressing room. With surplus of midfielders, Santi may be restricted to 2nd half appearances. He has Fabregas, Iniesta, Xavi et al to contend with. His eyes for goal and ambidexterity will surely give him an advantage.

Spain will face the Netherlands, Chile and Australia in Group B.

Thomas Vermaelen is among a vibrant Belgian team heading to Brazil with the hope to usurp the trophy. With Hazard,  Kompany, Dembele et al, Vermaelen will surely hope to get a medal around his neck at the end of the tournament. The Arsenal captain who lost his armband in the national side may be drifted to left back.

Arsenal have just one non-European featuring in the World cup. Joey Campbell. The young forward, yet to make his Arsenal debut has featured 30 times for Costa Rica scoring 8 goals. He will hope to reignite his champions league form for the South Americans. A good worldcup will surely make Arsene Wenger keep him at the emirates for the season coming and maybe loan out Sanogo. 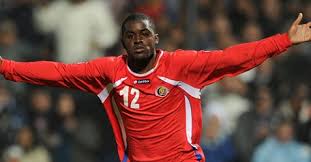 Costa Rica have England, Uruguay and Italy in their group (D). Will Campbell get a goal?

Johan Djorou is still an Arsenal player according to Arsenal.com. he will be in the heart of Blatter’s country defense. Equador, France and Honduras will be faced by the Swiss. Will they surprise France just like they did against Spain in South Africa?

So behold the Gunners in Brazil. Which one of them will come back to the Emirates with a medal around his neck? which one will have a personal award to his name? Which one will do something exceptional in Brazil?