Two defensive error from Sunderland gifted Alexis Sanchez is first Arsenal brace to give Arsenal maximum points from the Stadium of Light. The Black Cats have been trounced mercilessly by Southampton a week ago but the demon that befell them seems to have acquired a large space in the heart of the defence.

Alexis Sanchez have hugged the headlines for over two weeks now with his goals and assists saving Arsenal from either a defeat or as in Anderlecht a draw. The Former Barcelona man seems to be the only gunner that knows what it is to fight for a win or never give up. Sanchez was agile enough to grab the two goals thanks to errors from Sunderland’s duo of Wes Brown and Manonne, grabbing Arsenal’s 1500th Premier League goal. 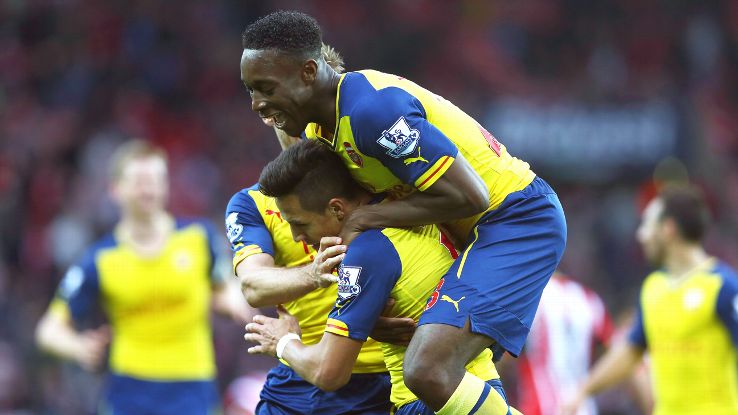 Sanchez is up there above every other gunner this season despite being newly added to the team. He is becoming the new Ramsey popping up with important goals to give Arsenal a degree of smile in the face of endless war to avoid defeat or gain maximum points. Arsene Wenger will continue to hope that sanzhez continues to give him the get-out-jail card when he is the tight corner. Shine on Sanchez.

Wes Brown invoked another version of slipping John Terry as seeming back base was a superb assist for Arsenal’s danger man. Sanchez kept lurking like Oliver Twist and he got another plate of goodies after the spirits that be rooted Vito Mannone’s feet to the Sunderland turf. The former Arsenal goalie picked up the ball 8 good times against Southampton and may have vowed never to pick as much balls of his net again. Unfortunately, his late error sealed three points for Arsene Wenger and his Gunners. Without the errors, Arsenal seemed to have forgotten their scoring boots and have misplaced their breakdown-opposition text book. It was a bad day for Don Vito. I feel for him because he was at Arsenal.

Who doesn’t love his direct play? Everyone does but in recent time the Ox has huffed and puffed to no avail. The Ox struggled to create chances against Sunderland. He did exhibit moments of trickery but all came to naught. Cazorla’s twinkling feets may have frozen despite having the luxury of starting most of the games with Ozil out. Cazorla was poor missing a couple of chances to have added to Sanchez’s 1st goal. The Spaniard had 4 shots on goal with just one on target. When Theo Walcott returns, how will the Ox and Cazorla play?

4. Another Poor Performance, Another Win.

The ultimate aim of a match is to win. In the last two games Arsenal has achieved that but have also made their fans sit on the edge of their seats, causing others to have heartaches or question their support for the Red Army from North London. The gunners have been poor to be fair. They were unable to break a Sunderland side that was dissolved by summer-sale Southampton. It has to classified as poor that we were unable to create much chances and the few that was created were misused. The gunners.

So two consecutive wins in two poor games may boost the morale in the team and spur them to another 3 points against Burnley and the visit from Anderlecht. While the confidence looks to be approaching a state where we can see it is visible, the gunners were hit with another injury with Gibbs sustaining a hips injury. Young Bellerin had to be brought in as a replacement thus moving Monreal to his original position.