The end of the short Arsenal preseason is here in the form of an encounter between Arsene Wenger and Jose Mourinho. It is the Community Shield game, the regular curtain raiser to the Soap Opera that glues the high and mighty to the screens across the world – The Premier League. 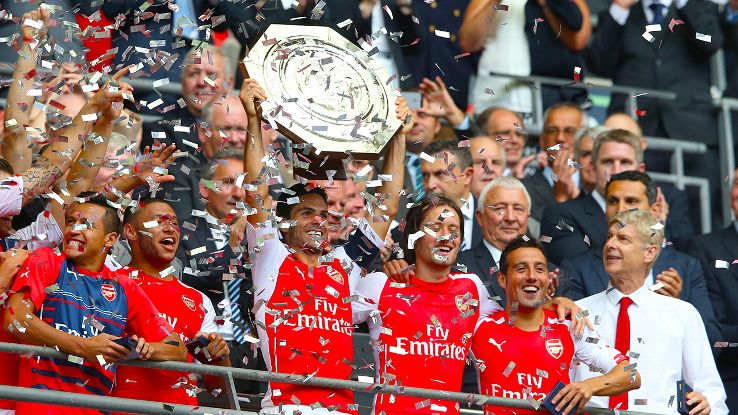 It has been bad blood especially seeing the childish comments from the Portuguese lacking respect and being overfed with oil money and Wenger’s inability to grab a win over him. I have no match preview for you other than that I need Arsenal to win the game for Arsenal, Arsene and Cech sake. It will be great to round up the preseason with a near-proper silverware with a value just below the League Cup. We can continue the unbeaten pre-season run and maintain another unbeaten run in the League – maybe surpass the famous 49.

Before the Wembley Fever kicks off later today, you must have known that Theo Walcott and Santi Cazorla have signed new deals with Arsenal. This is great news following the togetherness that has engulfed the squad since last season. There is a kind of buzz and happiness from the camp and i don’t know if it is the buzz that comes with winning trophies or because Arsenal is more than a football club.

Theo Walcott joined Arsenal from Southampton with milk teeth sucking breast milk with his cute harmless face. Now he has grown to be a man, although not yet at his summit. He sure wants to emulate Henry but time will tell. He sure looks set to stay beyond 10yrs for the Gunners and maybe retire at Emirates. Cazorla flew in from Spain and has wowed everyone with his ambidexterity and tricky of his feet. The new deal will sure squash those rumours of imminent return to Spain.

In other transfer gist, Flamini is reported to have rejected a move to Turkey. This is no news to me since I can’t remember the midfielder moving on a transfer fee. He always runs his contract to the last. Maybe, Le Prof will not get us the combative midfielder we longed for, to assist Coquelin. We will make do with Coquelin, hopefully he remains fit through out the season with little assistance from veterans Arteta and Flamini and maybe young Bielik or even Ramsey or Wilshere. It is Wenger’s job.

Just as the season is starting up in Europe, the League in Nigeria has resumed from its 2 weeks break. The break acted as a transfer window period for teams that wanted to fortify their armoury in preparation for the final lap of the Nigeria Professional Football League. There were a couple of transfers with Enyimba and Kano Pillars making good use of the window.

The resumption started off well in Port Harcourt with wins for Dolphins and Sharks FC. Ifeanyi Egwim grabbed the League’s 1st hat-trick of the season to help Dolphins to a 3-1 victory over visiting Nasarawa United. The boys from Lafia could not capitalize on their numerical advantage after Dolphins’ goalie Sunday Rotimi was sent off early in the game. In the other game, Sharks FC grabbed a 2-1 victory over 3rd placed Warri Wolves.

Today, all roads will lead to Aba where two time African Champions, Enyimba will host Enugu Rangers. The first leg ended in an away victory for Enyimba and Rangers will be hoping they inflict same pains to their host. The two teams have both won the Nigerian League 6 times each.

Finally, I woke up to see that Nicklas Bendtner came up from the bench scored a late equalizer as Wolfsburg defeated Bayern Munich in the German Super Cup. The Lord was the hero as he converted a low cross from De Bruyne in the 89th minute to bring Wolfsburg on level terms before the pemalties. He grabbed the headlines by scoring the decisive penalties to give Wolfsburg their first ever Super Cup trophy.

Sorry Lord, I was asleep but I believe in you.