When UEFA released the fixtures for the Champions League, i was excited that Arsenal will play on Wednesday and thus an opportunity to have what can be classified as a birthday present. 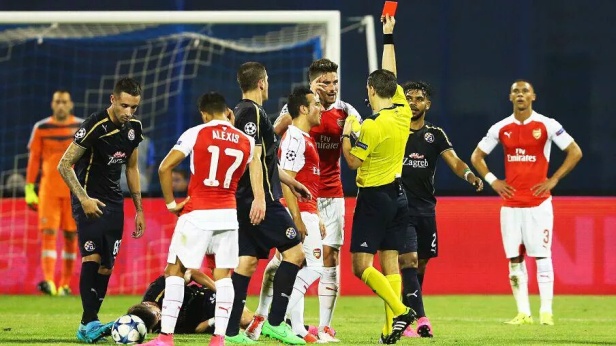 Fast forward to last night and Arsenal had other things for me. As expected the team was thinned down for rest sake and the upcoming Stamford Bridge encounter against Chelsea. Fringe and bit-part players started – Ospina, Gibbs, Debuchy, Arteta, Chamberlain, Giroud. But they didn’t put up a show to tell the manager they can usurp Cech, Monreal, Bellerin, Coquelin, Ramsey and Walcott. A 2-1 defeat with Walcott coming in from the bench to score a consolation was all I could get.

The Zagreb coach was all over the social media, praising Arsene Wenger and Arsenal, washing and setting them,  yet preparing to screw them when it matters. He claimed to have studied the gunners and came out with flying colours. A first group victory since 1999. I wasn’t even following football then.

Giroud had an early shower – 2 yellows. You can share the blame between the referee and the player but big Oli could have avoided the cards. Emotional management. The Ox is better suited for the bench, coming on to add nitro to the team towards the end. Last night he disappointed those that have clamouring for him to start every game. An own goal and previous errors alway seem to cancel out his goods. He needs to be wiser than an ox.

Is Gibbs still a footballer? I can’t believe I am asking this question because i once believed he was better than Monreal. Was he jumping or joking in the 2nd goal? He and Debuchy have just cemented their places on the bench and given Arsene Wenger the go-ahead to continue with Monreal and Bellerin. Arteta can keep the arm band and wait for 10mins to the end of a game especially if we are winning 4-0 in a cup final. The Coq is not looking back.

In all of these, we have Arsenal. We have the Stamford Bridge date with Jose Mourinho. Chelsea had a 4-0 victory over that Israeli team and the Hypo one will love to get 3 points from the Gunners. We have rested key players for this encounter. Anything less than a victory will not go down well.

And yes, enough of Copa America excuse for Sanchez. He needs to start delivering. His American brother, Cowbell Campbell had a taste of Croatia but had a yellow for his troubles.

The midweek started bad for Nigerian football as the male and female team lost in semifinals of the All Africa Games. Can my heart be broken?

Till we meet at the Bridge. Remain Zagrebbed.