Since Kos D Boss scored the only goal against Newcastle in the turn of the year, I have been on some nationwide run-around.  A third of my time was spent in the Murtala Mohammed Airport; the second third was spent with a friend that got married last Saturday with the final third buried in the hassles of work at the office. But the football-o-sphere has been hyperactive.

The Cries of Yaya Toure over the CAF Awards were in the air just before Arsenal progressed to the 4th round of the FA Cup thanks to a 3-1 win over Sunderland. The Gunners repeated same scoreline and same goal scorers as in December 2015 in the Premier League. The Gunners came from behind to help Big Sam align his attention solely on surviving relegation. Joel Campbell scored the equalizer before goals from Ramsey and Giroud wrapped things up, with a speedy display from Hector Bellerin. It is worthy to note that Nigerian Alex Iwobi was in the Ozil role during the Cup game and he was excellent. The reward is another home game against Burnley in the next round.

While we wait for Mohammed El Neny to join Arsene Wenger’s Army, the Gunners have travelled to Anfield to give Klopp another revelation of the Premier League. The German had warned Pep recently to do his researches very well before plunging into the heat of the Premier League. It seems Klopp didn’t do much research following his recent results with the Reds. They had salvaged a draw to Exeter on Friday and thus an extra fixture for their wounded side.

This wounded Liverpool side will be the obstacle to Arsenal’s quest to extend the gap at the top of the table. Wenger will surely not be flattered by Klopp’s praises. The job has to be done in 90 minutes of play. Cazorla, Coquelin and Sanchez are still out but the return of Tomas Rosicky is a boost to the squad.  The starting line-up should be: Cech, Monreal, Mertescieny, Bellerin, Flam-sey, Ozil, Campbell, Walcott and Giroud.

Campbell has been on the rise in some Coq-y manner. Who would have believed that a player who many fans needed out of the fold is proving everyone wrong with stellar displays week in and week out. Maybe The Ox will need to take some Coq and Camp lessons. It is also reported that Monreal has signed a new deal and how Wenger says he is not first choice is still a masterpiece of an irony.

Less I forget, Flamini didn’t win the 2015 Balon d’Or. He was beaten to it by Messi, who came from another planet. It sure saddened Mesut but if FIFA wasn’t corrupt, Lord Bendtner should have won the award for a record 10 times. But the Danish Striker is even bigger than FIFA and will not result to crying like a certain Yaya in Manchester. That FIFPro XI is just a joke. 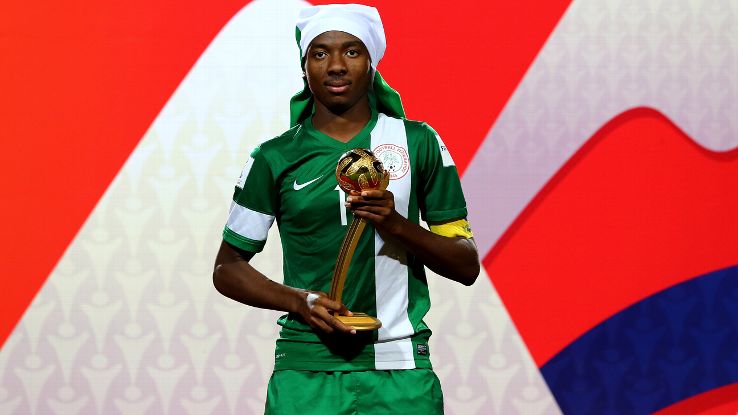 On the Nigerian front, two teenagers will sign professional contracts with Arsenal soonest. Kelechi Nwakali and Samuel Chukwueze, winners of the 2015 FIFA U17 Worldcup in Chile are expected to join the Gunners before the close of the January window. The LMC has also released the 2016 calendar of the NPFL. We shall see how things unfold.

Get ready for the game tonight.