It has been a thing of joy watching you play football for Arsenal. Just before the 2006 World Cup, it was announced that you would join the Gunners. I knew little about you and almost nothing about Czech. Before the 2004 Euros, Czech was just a country to me that produces the razor blades. But I knew better after 2004 and more by 2006. You had a good World Cup and I longed to see you in Arsenal colours. 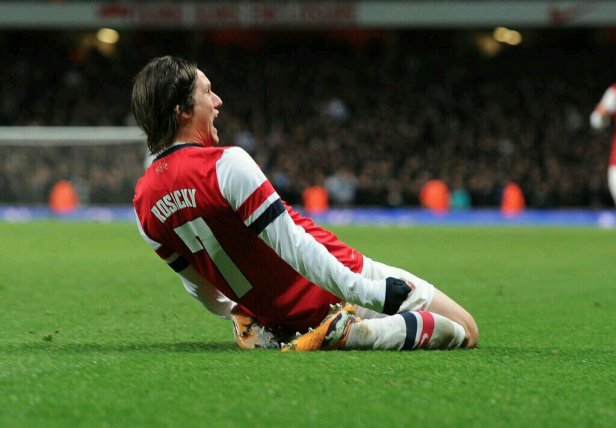 Likened to the legendary Berkgamp, but of a unique shade, you grazed the same pitch with Thierry Henry. I remember your brace against Liverpool in January 2007. The Gunners had a cup double against Liverpool at Anfield. The 2nd game ended 6-3 in the Carling Cup but the FA Cup, 3 days before, highlighted the potential you had. The way you skipped past those Kops still makes me smile.

You scored great goals and always had your foot on the pedal. I believe you dislike snails so much because you were the accelerator of the team. Everything was going well until you had that injury in January 2008. That hamstring tendon injury stole you away from football – from me. It took about 18 months before we saw you again. It was a long period and we could only imagine what might have been. We were deprived of your best. Cursed be that Injury. It robbed us of a captain and a leader.

We were happy to see our no.7 available for selection. I was excited. How your toes twinkled on the pitch creating rhythmic beats in my heart, caressed by the waves created by the rise and fall of your hair as you race towards goal like the ground will give way if you step on some explosives. The ecstasy you propagated for every goal you scored could not be contained. You were the adrenaline. We missed you. I miss you. I will always miss you.

I wanted you to stay at least 10 years with the Gunners and I am so glad you did. You were one reason I wanted Arsenal’s trophy-less jinx broken and I was so excited to see you play in the 2014 FA Cup final. My eyes were wet for days seeing you lift your first trophy for the Gunners.

I loved your change of gear, your acceleration, that tackle and the lovely outside foot. Who would forget your outside foot – your last contribution in the 2016 Euro was a lovely assist from that outside foot.

Ooh Tomas Rosicky, you are my legend and will always be loved. Hope to meet you one day.