44 seconds into the 2016/17 UEFA Champions League group stage, the Arsenal were stung by a Cavani header after a cross from Aurier. There were 89 more minutes left and the Gunners were able to salvage a point thanks to Alexis Sanchez. 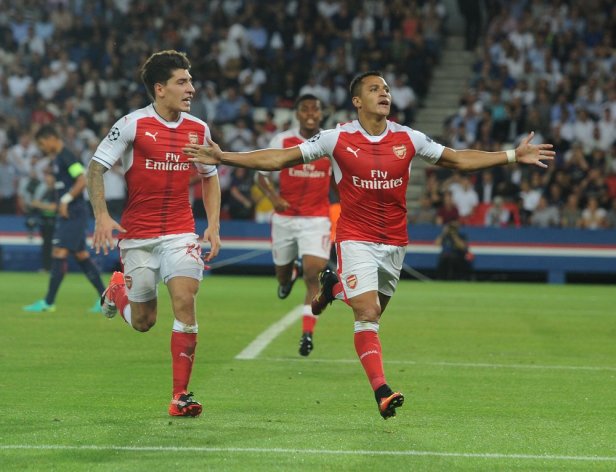 The 1st of the juiciest clashes in group A was scheduled for Paris and PSG made an impressive 1st half. Arsenal were bamboozled and were disorientated. Their quick and accurate passing game deserted them. PSG were pressing high up the field and could have added to their tally but were restricted by some last ditch defending, goal keeper presence and Cavani’s finishing. It could have been 3-0 by the break.

Di Maria even tried to score from a corner kick. Monreal was kept busy on the left and Sanchez kept drifting away from the centre. Arsenal started without Giroud or Perez but opted for the Chilean upfront. Flanked by Iwobi and Chamberlain, Alexis was less effective upfront.

Nigerian international, Alex Iwobi was involved in Arsenal’s equalizer. In the 77th minute, his shot from Ozil’s reverse pass was saved but Alexis tucked in the rebound to the disappointment of the home fans. Iwobi could have grabbed the winner but his tame shot was kept out.

Here's the moment @Alexis_Sanchez gave us a point in #PSGvAFC

David Ospina was called upon severally, especially after some defensive errors by the back four and he didn’t disappoint. He kept Arsenal in the game and PSG at bay.

There was time for two flashes of red – one for Giroud and the other for Verrati. The Arsenal man also got a red in the opening group game of last season. Video replays show he was not at fault last night.

Video: Marquinhos gets Giroud and Verratti sent off. #afc pic.twitter.com/I6rd7MdtLb

In other Champions League games, Barcelona went haywire with a 7-0 victory over Celtic. Messi grabbed a hat-trick, Suarez a brace, Neymar had a goal with 4 assists with Iniesta also on the scoresheet. In Munich, Bayern put 5 past Rostov while Manchester City’s clash postponed due to heavy rains. There will be more matches tonight

On Saturday, the Gunners needed a late Santi Cazorla penalty to defeat Southampton 2-1. The Saints opened scoring but birthday boy Koscielny scored the equalizer. It was a debut for Lucas Perez and Mustafi. It was also a birthday for Perez who grabbed an assist for Koscielny’s goal.

That is the lot for today. I have eyes in Abeokuta later today to watch the Elephants of Nigeria.