Two nights of the Champions League and the second group matches have been rounded up.

Leicester City’s fairy-tale continues in Europe. They are one of four teams with 6/6 points in the competition – rubbing shoulders with Barcelona, Atletico and Napoli with 100% result. You could reap millions if you drop a fiver on the Foxes winning the Champions League. 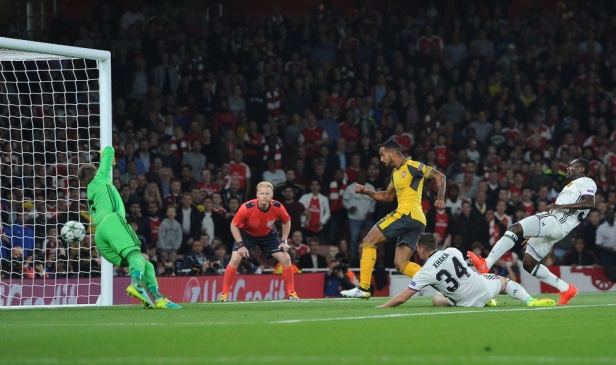 Theo Walcott’s first half brace was enough for the Gunners as Arsenal saw off Basel of Switzerland. It was a match that had two Xhakas on the pitch few days after their birthday. One Xhaka had to be victorious – the Granit One. Mohammed Elneny had a reunion with the team he left in January. So much love after the game but none within the 90 minutes.

Alexis Sanchez beat the offside trap before his cross was headed in by Theo Walcott. The Englishman has been on a rise this season and added a 2nd after nice 1-2 passes with Sanchez. The Gunners went missing chances upon chances with Sanchez and Ozil the culprits – take nothing away from the Basel goalie, he was good.

In the 2nd half Ospina was called into action a couple of times as Arsenal took their foot off the gas pedal. Chamberlain missed the opportunity to make it three for Arsenal with few minutes to full time. PSG were 3-1 winners at Ludogorets and are joint top in the group.

The Europa League continues today. Manchester United and Southampton will be in action.

Have a nice day.