The 2018 World Cup is finally over. The jubilation in France is not. Pogba led the songs in Paris and is leading the Shaku-shaku dance steps. The Croats are still hugging their president while Africans take solace in saying “An African team won”.

I hope Africa wakes up and fix its football. Will Nigeria get it right? There is still a Pinnick/Giwa battle and the league has been put on hold indefinitely. There is a looming FIFA ban. We need wholesome changes from the grassroots.

Back to Moscow, I went to the FIFA Fan shop at the Fan Fest where I hoped to get FIFA stuff on discounted prices. Emeka’s suggestion of coming back to the shop a day after the final worked well – a 50% sale was ongoing. We were able to pick a couple of items. There were no Nigerian stuffs. Our Jerseys were sold out from day 1. I went for the German white jersey and other memorabilia.

I needed the Tesla ball but it was sold out at the Fan Fest shop. We had to find our way to the mall at Red Square. Hunger struck, we tried My-My. My bill was bigger than the cash i had – thus i used my Visa Card for the first time.

The queue was long but when I got in my heart sank – no Tesla balls. Sold Out. The Red Square shop were not on sale too. Phew. There were other good looking item to be picked but the pocket was below sea level. 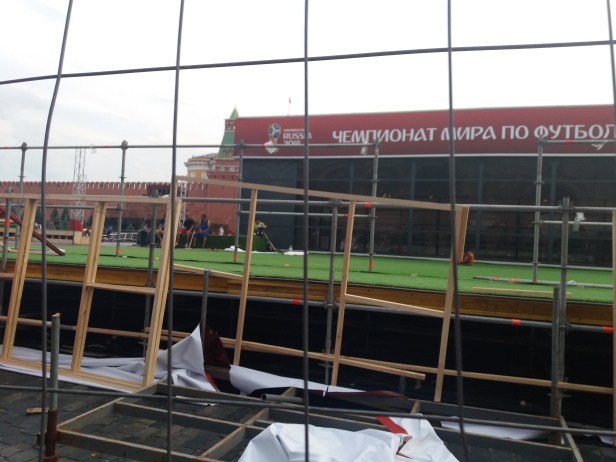 I took one last look at the FIFA arena at Red Square. It was being dismantled quickly. The Fan Fest arena was also being pulled down earlier in the day. Moscow is getting back to status quo.

I saw the pool of balls before heading off through Nikolskaya street where I met a large number of Croats still jubilating and singing. Did FIFA award them winners? Happy Croats. Singing aloud in Moscow.

Cookies and orange juice were enough for the night.