The much awaited first North London Derby of the season didn’t turn out the way the red half of North London wanted it. With 5 Englishmen in the starting lineup the gunners were hit by injuries to Ramsey and Arteta and fell behind to Chadli’s well placed goal. Chamberlain drew level for the gunners to give the gunners a point which is better than a home loss to bitter neighbours Spurs.

When Alex Oxlade-Chamberlain smashed into the top left hand corner of Hugo Lloris’s net, there was great relief and that was exhibited by his celebration mingled with immense excitation, sliding a la Giroud, boxing the corner flag with bottomless happiness. The goal came in the 74th minute, about 20 minutes after Chadli had put Spurs ahead. Taking no point out this game would have been disastrous irrespective of any circumstance. This is the North London Derby and their are no prisoners to be taken. The goal was a relief and offers a degree of satisfaction when compared to having no points especially after having as much as 70% possession.

On the other side, why have so much possession and yet feel relieved to have just a point when there is a maximum of three points to be grabbed. It is grieving to see Kaboul blocking every attempt that was created by Arsenal. And where he missed, Lloris was on hand to save. The gunners had every opportunity to grab all three points. Falling behind made one point a victory.

2. Two Injuries Too Many.

In the 28th minute of the game, Captain Mikel Arteta succumbed to injury and had to come off for Flamini. There was more injury to come. Just before half time, Aaron Ramsey pulled his hamstring to make matters worse for Arsene Wenger. Santi Cazorla came in for the Welshman reducing Wenger’s substitution to just one by half time. Wilshere even twisted his ankle and may not feature in the midweek Champions League. Ramsey and Arteta are out of the Chelsea game.

Suddenly we are short because if we lost three players today, and let’s not forgot that we already have two out long-term plus Walcott, that’s six. Diaby is not ready so it starts to become a worry. – Wenger, after the game.

Since the beginning of the season, we have had one injury or the other from every game we have played save the Capital One loss to Southampton and 3-0 victory over Aston Villa. It is yet to be fully understood as to the romance Injury and Arsenal have had over the years. You can win a big bet by expecting Arsenal to be hit by injuries. We are yet to have a full house this season to compound Wenger’s selection headache.

The gunners remain unbeaten in the Premier League for the first time since 2007 but have won just two games from six, drawing the remaining four. They have scored in every League game this season.

It’s frustrating. I think the positive is that we are unbeaten but the negative is that we’ve missed four points from the quality of the games we’ve played. Somewhere we have to keep that unbeaten record and I think at some stage we will win the games instead of drawing. I think today we would have won had we not conceded the first goal. – Wenger.

Arteta’s injury made way for Flamini to feature as the defensive midfielder. The agile Frenchman did his part but was robbed of the ball for Chadli’s goal. It is disappointing that such would happen to a player of such experience. He sure is on his diminishing curve and won’t offer the best he did at a younger age. Too many times we have asked who trully can anchor the midfield for the gunners. Wenger failed to secure the services of a joy-less DMF in the transfer window putting his faith on aging Arteta and Flamini.

Will Wenger use Chambers as the Four and play Bellerin in coming games? Or will start his lab experiment on Abou Diaby as the chosen one? Arsenal is indeed toying with fire and fate. Can he deploy Francis Coquelin or call on Isaac Hayden. This is going critical especially with the level of injury in the squad. Arsenal need a four. How will Arsenal face Chelsea?

Arsene Wenger featured five Englishmen in his starting lineup for the first time since 2003. Calum Chambers, Keiran Gibbs, Jack Wilshere, Alex Oxlade-Chamberlain and Danny Welbeck donned the red and white to face Spurs. Ox did score to get a point for Arsenal. There was a time when Arsenal where you would see just one Englishman starting for the gunners but the quintet will surely have more games this season if they stay fit. 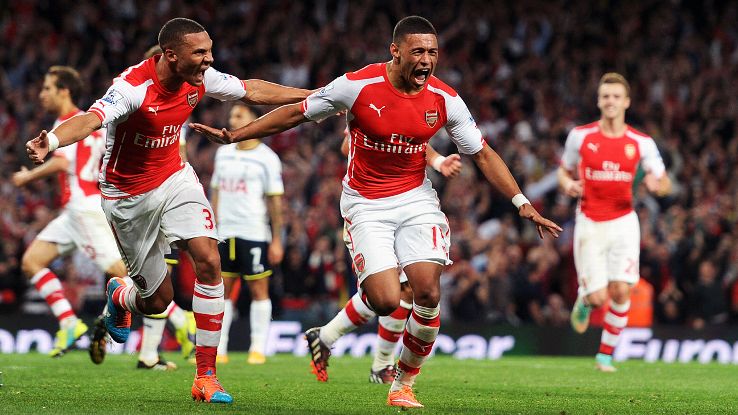 It sad not to win the North London Derby especially seeing that Chelsea and United got victories over the weekend. Attention shifts to the UEFA Champions League as we welcome Galatasary.