The FA Cup weekend started on Friday with Van Gaal’s United firing blanks at Cambridge, thus adding one more match to their fixture. Manchester City and Chelsea added to the FA Cup fun with home losses to Middlesborough and Bradford City respectively. City wwere stung by their mid week trip to Abu Dhabi for a friendly and may claim to miss current African Player of the year. But there is no excuse to losing 2-0 at home in straight succession.

For Mourinho, It was great seeing Bradford City come from 2-0 down to win 4-2 under the bridge. The price tags of the rent boys were sent to the cleaners as Mounriho could only express his embarrassment. At least, we can have less talk of the quadruple.

Our beloved Arsenal travelled to Brighton and Hove Albion and had to hold on to a 3-2 win to avoid being in the shoes of the Citizens or the Rent boys.

Walcott opened scoring, finally, in the 2nd minute before Ozil added Arsenal’s double in the 24th minute thanks to Rosicky’s hot-knife-through-butter pass. Rosicky did grab a goal, carved from the outside of his glorious boot. Rozza’s goal came after Brighton had pulled one back in the 2nd half. 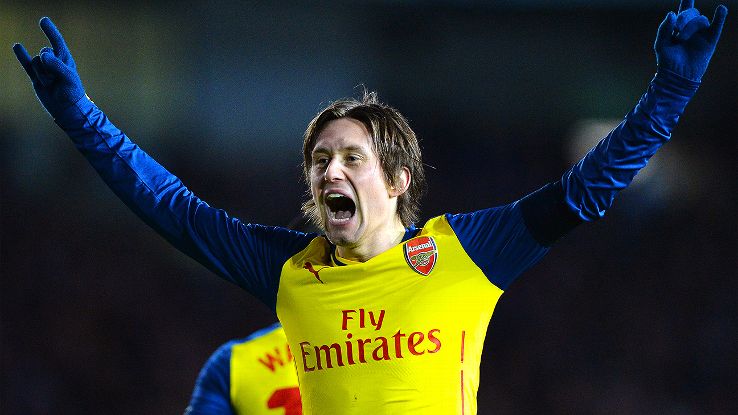 I have to be physically present for Thomas Rosicky’s testimonial for Arsenal. Is he really 34?

Brighton added another goal which fashioned out a tense and nervy finish for the gunners. The gunners held on, bringing on Le Coq to add some steel to the middle of the park.

1. Szczesny couldn’t keep a clean sheet but that was none of his fault. Unfortunately, his stained sheets won’t help him regain his shirt from Ospina.

2. Per gets his rest

3. Bellerin is better off at right back than Chambers

4. Walcott finally gets his goal, so does Ozil after a long injury lay off

5. If you love football, you love Rosicky.

It was a good weekend for Arsenal, especially seeing Sanago scoring for Crystal Palace and hearing that Gabriel is coming to save the defence.