Arsenal will pay a visit to Stamford Bridge to take on Chelsea in a tough Premier League clash on Sunday. Below is my predicted starting XI.

Arsene Wenger’s side have a chance to bring back their lost glory on Sunday. Travelling to the Bridge to take on the Blues, if Arsenal can secure an unlikely victory, then they would have their way back to level on points with Chelsea and in touching distance of the Manchester leaders at the top. But that will be touch, especially with Chelsea in top form and feeling of dread currently engulfing the Gunners.

Here is the predicted starting XI with Arsene Wenger having many important decisions to make.

It is a Premier League game and Petr Cech will remain between the sticks.

The first decision Wenger has to make is whether he should field the 3-4-3 lineup he has been utilizing so far this season, or abandon it for his accustomed 4-2-3-1 formation.

I believe, for now, the Frenchman will continue with 3-4-3. The primary reason for thinking that is thinking Wenger will want to face Chelsea with using the 3-4-3 lineup, as he did so successfully in the FA Cup final.

If that is the case, as I think, then our back three is fairly easy to predict. Laurent Koscielny will always start as the anchor of the defence with Shkodran Mustafi alongside the French defender with Nacho Monreal playing on the left-hand side of the three as he has done for much of the season thus far. 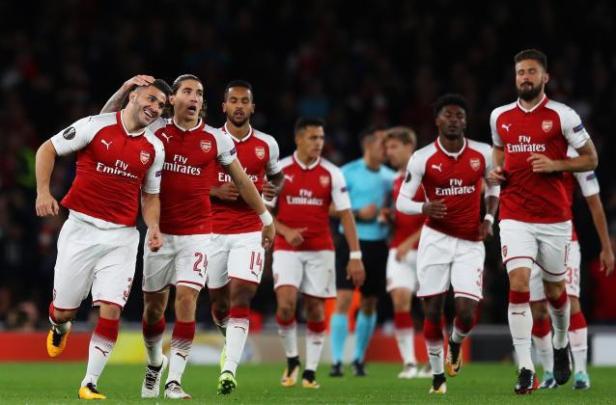 Against Chelsea, the duo will have to be a little more reserved, aware of the threat that their hosts pose on the break. With Eden Hazard expected to return, both Bellerin and Kolasinac face their toughest challenges of the season. Let’s hope they can step up to the mark.

The duo finds the net on Thursday night and were some of the Gunners most powerful attacking players, moving forward from their respective full-back positions, sending in crosses into the box and providing the width that allowed Alexis Sanchez to move inside and roam. Bellerin and Kolasinac have the ability to find those pockets of space in the final third that can send a defence into fits.

Like much of the other teams, as long as Wenger continues to use the 3-4-3 formation, as I expect him to do so, there are Arsenal starters that are clearly ahead of other options in the squad.

The partnership of Granit Xhaka and Aaron Ramsey is one that has mainly, enjoyed great success. The duo plays well together, with the Swiss international acting as the cornerstone between the back three and the midfield, and Ramsey given the freedom to affect the game in the final third, making those penetrating runs from deep that he is so adept at.

Against Liverpool, though, it was Xhaka and Ramsey who were dismantled in a worryingly absent display. Klopp’s vibrant and energetic midfield overran Xhaka and Ramsey, with vast spaces exploited, exposing a back three that simply had too much ground to defend.

Chelsea have the same quality on the counter-attack, and if Ramsey especially, is not put under scrutiny, then Arsenal will be opened up with painful regularity. The Welshman is a superb talent but his defensive naivety can be an issue. Ramsey must ensure that is not the case on Sunday.

For the first time this season, it is expected that we will see Alexis Sanchez, Mesut Ozil and Alexandre Lacazette play alongside one another. That may be harsh on Danny Welbeck, who was instrumental in the comfortable win over Bournemouth last week with two goals and an assist. But that is what money dictates.

The trio could stake a claim to be the most exciting and potent strike force in the Premier League, if they click with one another. They will not face many defences as stifling and suffocating as Chelsea’s and if they are able to engineer angles and opportunities against the Blues, then that will be a bright sign for things to come.

For the first time this season, we should be seeing the partnership of Alexis Sanchez, Mesut Ozil, and Alexandre Lacazette play alongside one another. That may be somehow on Danny Welbeck, who orchestrated our comfortable win over Bournemouth last week with two goals and an assist. But that is what money dictates.

Sanchez, Ozil and Lacazette could stake a claim to be the most exciting and possibly the best striker force in the Premier League, if they click with one another. There will not be many stifling and stubborn defence as Chelsea’s

In particular, there will be prying eyes on Lacazette, who is new to English football. The French striker comes with a rather formidable reputation which he has showed in his first two goals in three Arsenal epl fixtures already, including a precise, curled finisher against AFC Bournemouth.

If Lacazette is able to bag a goal against Chelsea, then he will only cement his place as one of the most inexhaustible strikers in the Premier League. Yeah, you feel that, if the Gunners are to win, it will depend on how the three performs.