Arsenal put up an average performance against newly promoted Leicester City to get a point from the King Power Stadium. Days after earning a very late point at Goodison Park, the Gunners failed to grab a win. Alexis Sanchez opened the scoring in the 20th minute but the foxes got back 3 minutes letter, thanks to a header from Ulloa.

Giroud’s injury a week ago at Goodison Park handed Sanogo another chance get his first competitive and first Premier League goal. The young french striker unfortunately did not get on the score sheet although he had 7 lame shots, including blocked shots. Sanogo does have a wonderful workrate but his first time touches have been horrible. 3 months without Giroud would spell disaster for the Gunners.

Relying on Sanogo would be bizarre. Sanogo needs to go sharpen his skills on loan, take off those rough edges and return a refined striker. For now, Arsenal should not breed him upfront at the expense of precious points. Arsenal need a point man as soon as possible. The transfer window will short within the next 24hrs, will Wenger get a new striker? or would he try out Chuba Akpom or Joel Campbell?

Arsenal had a total of 24 shots, 6 on target, 5 off target and 13 blocked according to whoscored.com. Yaya Sanogo had 7 shots, including blocked shots but could not find the back of the net. Aaron Ramsey had a couple of shots off target. Cazorla’s free kicks and shots were lame. Ozil had no shot. It is high time the Gunners start taking all chances seriously.

Our game was not quick enough, not sharp enough, not simple enough. We had plenty of opportunities but didn’t look like we could finish the game off – Wenger

In as much we pride ourselves as a side that creates chances, it is useless when these created chances are not converted to goals. 69% ball possession with just a point to show.The gunners must be clinical in front of goal if they are to make any title challenge.

Alexis Sanchez has now scored a goal in each of his last two games. The South American is beginning to get his feet in Emirates. His work-rate is high but can tire him out with time. The defenders in the Premier League are more physical than those in the La Liga. Nevertheless, the signs show that he would score more goals for the red and white half of North London. He is on the ascendancy and his team mates must ascend with him. 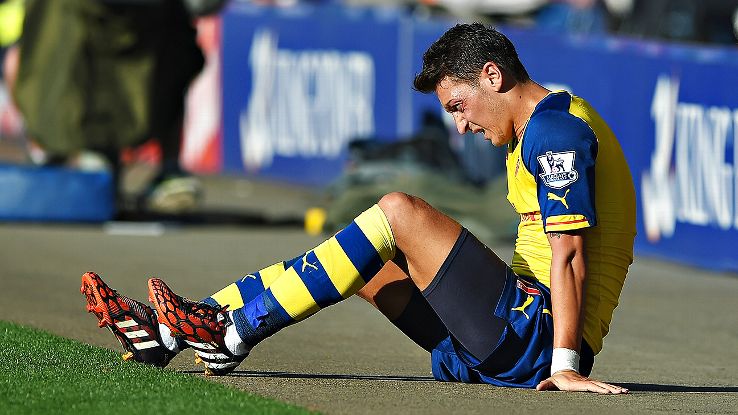 Can Arsenal play a game this season without getting one or two players injured? Gibbs, Arteta, Giroud got injured consecutively in the first 3 games of the season. And now, three players didn’t finish the game as they started it.

We had Ozil with an ankle and Oxlade-Chamberlain with a calf. Of course Koscielny as well.

Koscienly had a head injury which may have caused the conceded goal. Ozil injured his ankle just after Wenger had finished his 3 subs and Chamberlain, one of the subs had a problem with his calf late on. All this had a share of Arsenal’s problems at the King Power stadium. We may need to appease the gods somewhere to free the gunners from this injury romance.

The Leicester City game can be summed up as two points lost. The gunners could not hold the 1-0 lead for up to 3 minutes and failed to score afterwards. The missed chances, coupled with injuries made the team look so lame and even vulnerable to concede.

We lost two points but we have to respect the performance of Leicester and be realistic – we could have lost the game in the end. – Wenger.

With Chelsea’s 6-3 bashing of Everton, the gunners are now 4 point behind the leaders. Swansea also have maximum points. Liverpool took Spurs to the cleaners.

So the international break comes up shortly but the transfer window closes within the next 24 hours. who else is coming in? Will anyone leave? Only Wenger knows.

One thought on “The Five: Leicester City 1-1 Arsenal, Gunners Foxed.”