The blue half of Manchester had a taste of Francis Coquelin and were mesmerized by Santi Cazorla as Arsenal geabbed all three points from the visit to the Etihad. Cazorla opened scoring from the spot in the 24th minute after Kompany body checked Monreal. Cazorla turned provider in the second half as Giroud sealed 3 points for the gunners after 67 minutes.

Lauret Koscienly picked up an early yellow card and it seems it is going to be one of those days that an Arsenal goalie will pick the ball six times from his net. The Citizens bombarded Arsenal’s backline but the gunners held the fort properly. I looked for Aguero but Koscienly made him invisible despite being on a yellow card. Aguero’s major contribution was a yellow card for fouling Gibbs late on in the game. Metersacker metercepted and envy had Aguero clean the Etihad turf, Bellerin made Milner sweat and Coquelin stood like a rock. It was a collective effort and it continued in the second half especially immediately after the break with Jovetic joining Aguero upfront. Did Ospina make any great save? A clean sheet for the Colombian and another worry for Szczesny. Where was Silva and Navas? they were collectively kept a bay by Monreal and Arsenal

Where has Le Coq been?

Francis Coquelin has been a revelation to many since he returned from Charlton Athletic on Loan. Le Coq has been in tremendous form and have secured a sit for Flamini on the subs bench with Arteta having an injury set back. The purchase of young Beilik looks like for the future but Le Coq has provided a solution for Wenger’s defensive midfield headache. Le Coq was a spanner in City’s engine room and Wenger had this to say about Coquelin:

I took him from France at the age of 16. Today he is 23. He has gone through some difficult periods but he’s a learner from his experiences. I’ve always kept faith in him, because I told him three months ago that he needed to play somewhere. He accepted to go down to Charlton and had convincing performances. Now he’s come back, I’ve played him and he’s done very well.

With 11 clearances, 7 headers won, 6 interceptions, 3 blocks and 100% tackles won (according to Squakwa), Coquelin is my Man of the Match. It is high time we send everyone to Charlton for a month loan.

The game was billed for a showdown between Alexis Sanchez and Kun Aguero but they both failed to live up to the pre-match buzz and expectation. They were marshalled away and gave the ball away quite easily. But a little Spaniard stole the show with his twinkle ambidextrous feet. Cazorla made mincemeat of City’s players, running round them and causing them to fall like packs of cards. A goal and an assist caps up the performance for the creative midfielder. 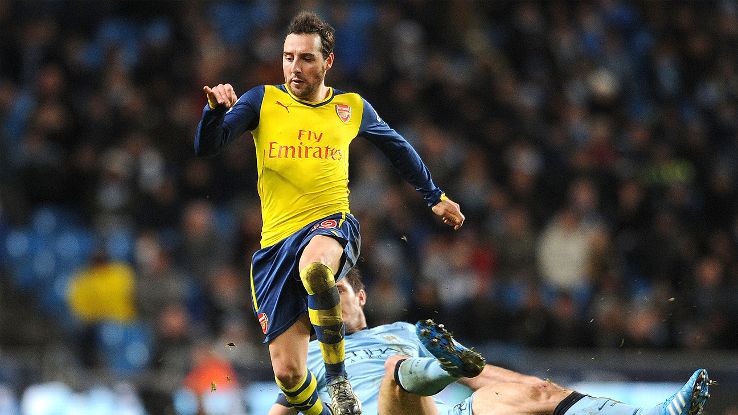 He is the man. Even Henry on his punditry debut had this to say:

He controlled that midfield. To come and play the way he did here at the Etihad Stadium was outstanding

What a player. I said before the game that people were focusing on Sanchez but at the moment, Cazorla is the guy that makes the team tick. Sanchez didn’t have a great game today, but they won 2-0

He’s always smiling. I also like the fact he was trying to calm people down when Arsenal were under pressure

A Big Win Away, A Trend to Stay

Three times Arsenal have faced Manchester City, Three times they have avoided defeat, Twice they have kept a clean sheet and should have won at the Emirates only to draw 2-2. The bookmakers had a City win on their cards but Arsene Wenger had a plan B. He rare has one, but he had to get one for City. Winning big teams is now becoming a mountain task for the gunners but this win over City may signal a turn towards the right direction. Will this trend continue? Can we get all three points at Old Trafford? Can we get a win over Mourinho at Stamford Bridge? We can if we play like this and defend collectively with full concentration. Yes the possession stats were poor but who cares after the three points is home and dry.

When the team sheet was released, a friend of mine posted this tweet:

@AmosCP this is ManCity nna.. Remember Dortmund away? He was outplayed even with his pace. Milner will just muscle him out there

Our wing backs are just too weak. This is ManCity not Stoke. Maybe Wenger gambled on that cos Chambers & Gibbs just returned 4rm injuries.

Many were scared of the two full backs, prefering Gibbs and Chambers to Monreal and Bellerin but the result of their play made many to eat their words. Bellerin kept Milner at bay, Monreal won a penalty off Kompany and held his wing well enough. After the game he tweeted this:

@AmosCP hahahahahaha. I was really impressed

I wonder how Jenkenson feels about the right back position at the Emirates.

For now, enjoy the victory.